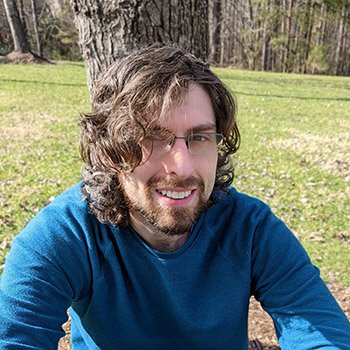 As a kid, Kevin Kauffmann would spend most days creating worlds and adventures for action figures and old Transformers. After grabbing a degree from UNC-Chapel Hill, he decided that creating worlds should be more than a hobby.

The Icarus Trilogy, a sci-fi tale about futuristic gladiatorial warfare, was Kauffmann’s first series as a self-published author, but then he switched gears to tell his Forsaken Comedy, a dark fantasy trilogy about the Four Horsemen of the Apocalypse. His latest, Ouroboros, is a representation of hallucinogen use and self-destructive behaviors and has been re-released through 25 & Y Press as one of their first offerings.

In addition, Kauffmann will soon release a reimagining of his Rumpelstiltskin the Third collection, and he is currently working on Abnormality, the first novel in his superpowered saga, and Daytrippers, the first in a psychedelic paranormal science fiction series following the events of Ouroboros. All three of those projects are being developed through 25 & Y Publishing.

In his free time, he also plays a ton of Beat Saber, as evidenced by his YouTube channel, and hosts a serialized horror title, the 616 Diaries, on Inkitt. Currently, he lives in Durham, North Carolina.

The line between reality and escape is one dose away….

In Ouroboros when Escape was created, the United States was already losing the War on Drugs. Public opinion shifted over the decades into apathy and acceptance. A hallucinogen that allowed the user to escape to another life was not just appealing, it was the perfect substitute for the society the last generation had left them.

Taken safely, Escape was all a person could ever want. But everything changed once a young boy died with a small tab of paper on his tongue. Ouroboros engages with a society that has given up on its present and failed its future. Its citizens are trapped in a world where meaningful change seems impossible.

In the quest for vengeance, the first death is your own.

A finalist for Baen’s 2018 Fantasy Adventure Award for short stories and recipient of an honorable mention from Writers of the Future, Ashes for Ashes is a dark fantasy ghost story of elves, skin walkers, hatred, and greed.

After the genocidal destruction of his race, an elf seeks vengeance. But in the quest for vengeance, the first death is your own.

The journey within leads to a new world without.

For a close-knit group of friends about to enter the real world, the plan was a short excursion to a new experience. The result is a new reality no one is prepared to face.

Comprised of fourteen short stories, this collection contains three works of dark fantasy, four works of dystopian sci fi, two works of dark mythological fantasy, one monster sci fi, and also including four set in the same alternate reality Closing Time series world as Daytrippers and Ouroboros. Many of the stories focus on characters who seem to be dead people walking, some of whom know it, some of whom don’t.

All that’s between an immortal boy and the adventures he seeks is an incurable curse.

When a boy is saved from a cruel death by accepting a curse, he becomes the third incarnation of the imp called Rumpelstiltskin, cheerfully stumbling into adventures across a world that despises him, changing that world as he goes.

Other works by Kevin available on Amazon