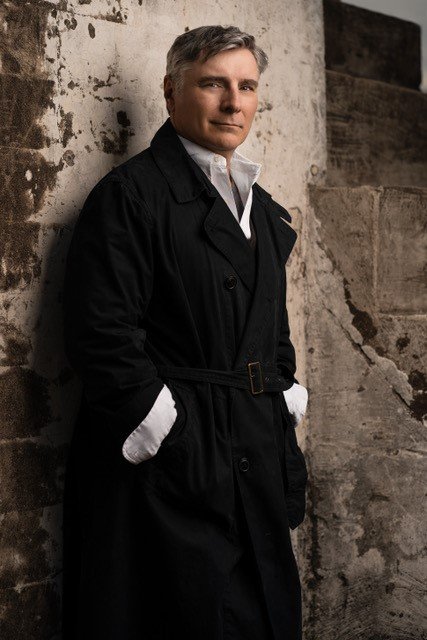 Hank Schwaeble is a horror, thriller and suspense writer whose credits include Damnable (Berkley/Jove), which won the Bram Stoker Award for Best First Novel, and Diabolical (Berkley/Jove), as well as The Angel of the Abyss and the horror-noir collection American Nocturne, both re-released in 2021. His latest collection, Moonless Nocturne, is slated for publication in 2022 from Esker & Riddle.

A graduate of the University of Florida and Vanderbilt Law School, Hank is a practicing attorney and former Air Force officer and special agent for the Air Force Office of Special Investigations. He was a distinguished graduate from the Air Force Special Investigations Academy, graduated first in his class from the Defense Language Institute’s Japanese Language Course, and was an editor of the law review at Vanderbilt where he won four American Jurisprudence Awards.

In addition to reading and writing, Hank enjoys keeping in shape and playing guitar. Hank and his wife, fellow writer Rhodi Hawk, make their home near Houston, Texas. He is currently working on his next novel.

Never one to leave well enough alone, ex-special forces interrogator, hardboiled investigator, and demon magnet, Jake Hatcher, went looking for trouble and found it. Finally able to be with the woman he truly loves, his bank account swollen beyond proportion, life for anyone else would seem charmed, but his good fortune came at a steep price. Two years after witnessing his former lover, Vivian Fall, disappear into perdition, Jake may finally have been offered a way to free her. But the forces determined to stop him are hidden, and a deal with the devil cannot easily be trusted. Jake must discover for himself if he has what it takes to survive a battle of wit and wills with both an unknown contender for the Throne of Damnation and the being that has been its occupant since the dawn of creation.

Bram Stoker Award nominated collection about to be back in print!

As a nocturne captures the mood of the night, reminding you of things that happen after dark falls, this collection evokes that liminal time after sundown, when moonlight owns the earth, and you can wander in thoughtful silence. But this time, you are a hopelessly lost trespasser. And the locals are armed and shoot to kill.

Where a moonless night is a portal to your nightmares.

Hank Schwaeble, master of horror noir storytelling, is bringing us a new set of short stories to intrigue, frighten, surprise, and delight fans of atmospheric tension that takes hold and doesn’t let you go until the very end. It is with curiosity and some trepidation that the reader will wonder, “Where is this story going?” With the underlying feeling, “This can’t end well.” Prepare to pick this collection up and not want to put it down until you are finished.

You can’t escape a checkered past. But you can evolve from it.

Darwin’s Laws follows a man born and raised a criminal who escaped the life after the incarceration of his father, living quietly as a law-abiding citizen. When a girlfriend’s mob-style hit, a law student seeking justice, and an FBI agent willing to bend the rules force him to a new theory of life, he decides his only chance is to follow the law–not the ones on the books, but his own.

They were not like the others, these heretics this morning burned. They sang of their guilt, yet feared neither rack nor screw nor iron. The promise of perdition struck no impression, nor the Apocalypse of St. John. ‘Twas no lust to rule the Night that drove them, but a quest to overtake the Day. The Crown of Hell was not enough. They bowed not to the Prince of Darkness, for they awaited their Emperor of Shadows.

His Lordship Sir Robert Edmunds of Colchester, Witchfinder of Essex, 1646

Other works by Hank available on Amazon